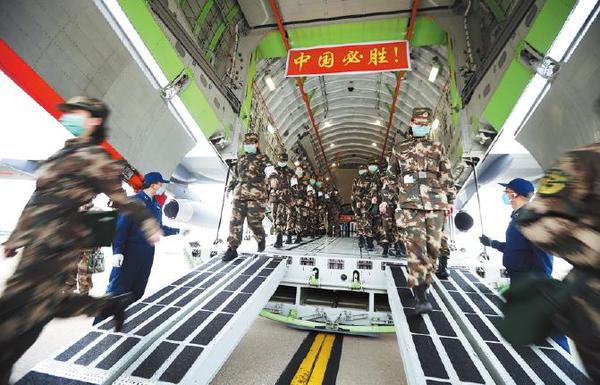 Medical personnel from the People’s Liberation Army get off a military transport aircraft at Wuhan Tianhe International Airport in Hubei province on Thursday, marking the first civilian-related mission carried out by the PLA’s Y-20 transport aircraft. The 1,400 military medical workers, boarding 11 aircraft, will be joined by another 1,200 colleagues in the latest effort to fight the novel coronavirus pneumonia outbreak in Wuhan. CHEN XIAODONG / FOR CHINA DAILY

China can minimize the impact of the novel coronavirus pneumonia epidemic, maintain the country's momentum of economic development and work to achieve the goals and tasks for this year, President Xi Jinping said on Thursday evening.

He made the remark in a phone conversation with Malaysian Prime Minister Mahathir Mohamad, whom Xi described as an "old friend of the Chinese people".

Mahathir's phone call at such a critical period when the Chinese people are fighting the contagion shows Malaysia's friendly feelings and support for China, Xi said.

Xi stressed that the Chinese government has adopted the most comprehensive, strictest and most sweeping preventive measures since the outbreak of the epidemic.

The fatality rate remains at a relatively low level, breakthroughs are being made in treatment methods and the recovery rate continues to rise, he said.

Xi said that the Chinese government will lead its people to win the war of epidemic prevention and control with greater confidence, stronger resolve and more targeted measures.

Meanwhile, China will keep marching toward its long-term goals with determination, he added.

Xi noted that China's strong measures to curb the contagion not only show its responsibility for the health of its own people, but also its contribution to global public health.

This has been fully affirmed by other countries and the World Health Organization, he said, adding that China will continue to strengthen cooperation with the international community to fight the epidemic.

In particular, the governments and people in neighboring countries with friendly relations with China, including Malaysia, have taken positive steps to provide timely assistance to China, he said.

This is a vivid example of how countries in the region help each other in times of need, Xi said.

He said China will continue to enhance preventive cooperation with member countries of the Association of Southeast Asian Nations in a transparent and open way to jointly safeguard public health in the region.

China will continue to treat citizens of Malaysia and other countries in China the same as Chinese citizens and take care of them, he added.

Xi also said that the profound friendship between the people of China and Malaysia is unshakable although the epidemic has temporarily affected normal personnel exchanges between the two countries.

While the two countries are joining hands to deal with the challenge, Xi called on the two sides to continue to deepen bilateral ties especially in cooperation on jointly building the Belt and Road to produce more outcomes that benefit both countries and peoples.

Mahathir, on behalf of the Malaysian government, expressed condolences to the Chinese government and people over their suffering as a result of the epidemic.

Malaysia greatly appreciates the efforts and positive progress that China has made to deal with the contagion, which is China's contribution to maintaining global public security as a responsible country, he said.

Mahathir said that as a sincere friend of China, Malaysia has already provided a batch of medical supplies and is willing to continue to provide assistance.

The Malaysian prime minister stressed that his country believes that China's development can return to normal under Xi's leadership.